Tigerland documentary made by the Discovery Channel, on tiger conservation highlights Sankhala families’ efforts to save the Tiger in India. The documentary was released at Sundance Film Festival in February 2019. Soon to release worldwide.

In the span of only a handful of generations, the tiger has been transformed from a venerated creature with a role in our cultural consciousness into a major source of revenue – and the population of wild tigers in Asia has dropped from over one hundred thousand to less than four thousand. TIGERLAND illustrates how shifting political realities in Russia and India created a lucrative poaching underworld that decimated the tiger population. In the face of corruption and cultural apathy, Russian scientist Pavel Fomenko and the conservationist family of Kailash Sankhala of India lead inspirational tiger-preservation movements to keep the legendary animal from disappearing entirely. Combining vérité, archival material, and breathtaking landscapes, director Ross Kauffman captures Fomenko’s contagious passion as we go into his wildlife sanctuary and witness his deep connection to the tigers. Meanwhile, the Sankhala family inspires others to fight for the tiger’s survival through literature and tourism. 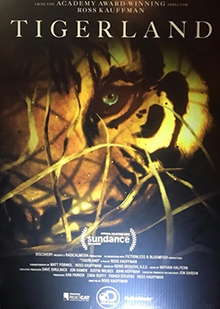